Up early this morning to meet Inge for a skate on Poolburn.  Ice the same as yesterday.  Good skating with some smooth areas stronger over night.   Some water showing around the edges by the time I left.
Headed to Grey Lake to see if the ice had lasted there.  Had a skate on a new dam then walked into the lake.  Fab ice - snow ice again but smooth and hard.  Great skating.  Ice started to soften as I left.
Great skate day.....

Poolburn has a huge chunk of skate able ice in the main bay.  Could work again tomorrow with a frost. Edges melting in the warmth.   Ice hard and rippled with some smooth areas.

After a good frost, headed to Central today to see what survived the big rain storm last week.
Snow ice seems to have survived well.  Had a good skate on Coalpit - hard bumpy snow ice but ok with the hockey skates.  Some super smooth ice around the edge.  Had a wee skate on Hoffmans as well but the edges were going off in the sun.
Checked out Poolburn (after a mucky ride up) and wow much of the lake covered with hard and fast snow ice.  Most of it had a 'ripple' effect from the wind.  Wind effects were evident.  But good skating  with some big smooth patches.  Refrozen open areas were too thin but did skate on a bit of crazy pave ice. Able to skate out to the main island ok.  Edges everywhere were refrozen and thin
Great skate!!


Coalpit:  Snow ice over whole dam - most skate able.  Hard and bumpy but ok with Hockey skates. Go from the shady side
Hoffmans:  Snow ice.  Hard and bumpy. Watch the edges.  Softens in the sun.  Skate early.  Have a safety plan.
Poolburn:  For the keen.  Hard wind effected hard snow ice with some smooth areas.  Watch the ice as the snow ice hides hazards.  New ice is thin.  Check the ice first and have a safety plan.  Track gnarly.
Posted by Dave at 7:56 PM No comments:

Up to Poolburn at first light - surprised to find so much ice still there.  Reformed snow ice.  There was wind blowing making it interesting watching the ice surface evaporating as I skated.  Had a good skate then switched to the touring skates for a bit.
Enough wind to get the kite out and had a great time kiting across the main bay.  By the time I left after mid day there was water forming on the ice showing the hard 'crazy-pave' ice underneath. Be interesting to see if the ice survives the wet weather over the next few days.
Dropped in to Hoffmans Dam for a quick skate on the way home.   Great day. 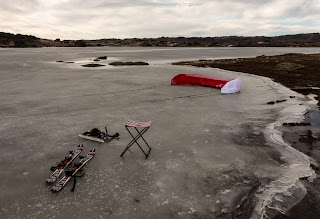 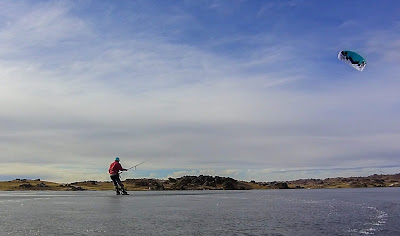 Hard to know what will happen to the ice over the next few days as temps and wind  are up and a cold front is due.

Decided to head to Central before the next storm to see if there was any ice left.  Pleased to find skate able ice at Coalpit and Hoffmans Dam.  Had a good skate on Coalpit - ice was hard refrozen snow ice.  A bit bumpy in places but a good skate.    Met up with some visitors and got young Sam out on the snowskoot.
Had a quick skate on Lower Coalpit but the ice was pretty thin.
Hoffmans was the real surprise.  Smooth ice on most of the main area.  Fab skating and hard to leave - glad I took the head light to get back to the truck.

Coalpit Dam:  Snow ice - skateable with the frost.  Go from the shaded side.  Thinner in the middle.
Hoffmans Dam:  Smooth snow ice.  Careful around the edges.  Too thin through the tail.
Snow ice is unpredictable so test first and have a safety plan.  Only good with a frost.

Up to Poolburn at first light.  Good to find the water between the ice and snow had frozen.  Did a couple of circuits around the main island then changed to the Nordic touring skates.  I am getting used to these and found them great on the bumpy ice - smooth as.   On the way out had a skate on smooth ice at the track dam.  Stopped in at Idaburn for a quick circuit because I could.
Checked D-Dam and had a quick skate there then finally Coalpit - which had refrozen into hard bumpy ice.  A few circuits then on with the touring skates.   A good skate day all round.

Idaburn - snow ice on top of hard ice.  Hard and bumpy with a frost but softening in the sun.
Coalpit - Refrozen snow ice - hard and bumpy - would be ok with frost.
Poolburn - Variable - some refrozen ice - snow covered in other places.  Beware hidden hazards under the snow.  New ice is thin.

Heading to Queenstown for a ski I decided to go early to check the ice after the big storm.  Still quite a bit of snow around.  Coalpit and Idaburn had a layer of crusty snow/ice over the good ice with water between. No good for a skate.  Decided to check Poolburn as the hills seemed clear.  Poolburn had similar conditions but a bit harder surface in places.  There was enough  remelt at the edge to have a small skate. Then put the Nordic skates on.  Weird skating on good hard ice with a crusty watery layer on top.  Nordics were great and I went out to the small island and back. Found some edge parts strong enough to have a bit of fun and really enjoyed skating into the dusk  Put the hockey skates on at the end for a bumpy ride. Finished a night skate at the Lower Manorburn  on good ice in Rushcutters.  Didn't go right out as the ice seemed to thin and creaky.  Great way to finish the evening.

Lower Manorburn - Some skate able ice from Rushcutters - but skate with the frost.
Idaburn/Coalpit  - snow covered ice with water between - needs a thaw and refreeze.
Poolburn - snow covered ice but a few remelted areas.  Need a good freeze or thaw and freeze.
Nothing will be good if it is warm.  I sure have a dirty truck now.....

Up to Poolburn and met Dave for a dawn skate.  We skated around the back of the main island avoiding the open water and eventually into the tale of the lake.   There was a huge area of black ice then snow-covered ice at the very end leading up to the streams.  A satisfying skate.   I skated back first and met up with Inge and Jane then headed off for another trip around the island. We ended up with a busy afternoon when others showed up.  Good to see people making the most of the ice before the snow comes.  About 7 hours skating for me all up (Dave longer).  Unusual to see mist blown up from the valley below and across the ice.  Poolburn - always changing.....
Snow is due over the next two days so not sure what will happen to the ice.


Poolburn: on hold till the snow goes through.

Up at dawn this morning to meet Dave. We headed up to Poolburn and out exploring where we could on the ice.  Ice was a bit stronger today and we managed to get to the far end of the lake.  Some areas at still too thin especially as the day warmed up.
I left Dave there to camp over night and drove over to the Grey Lake (I think that is its official name although it seems green to me?)  I had visited in summer as a potential place to skate. It was a bit of a trek down through the snowy track but rewarding to find skate-able ice there in a fantastic setting.  Ice was mix of green ice and snow ice and although it was in the warm part of the day most of the ice was hard enough to skate.  Interesting to  see and hear the constant erosion of the cliff - including a bit of a slide with clay smashing onto the ice.  Worth the magical walk through the snow and trees although next time I won’t forget the ice spikes as the track was slippery in places.  Great day! 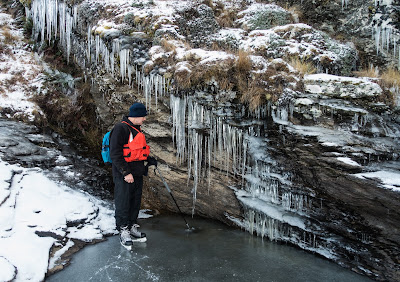 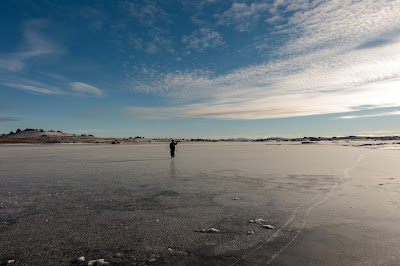 Poolburn: Good ice in the main bay. Varies elsewhere so check first.  Track ok when frozen but muddy and slippery when thawed. Skate with the frost

Manorburn - skate able ice out from Rushcutters corner.
Posted by Dave at 8:11 PM No comments:

Up early to meet Dave and head up to Poolburn at daybreak.  Fabulous ice in the main bay - not that thick but skate able with the frost.  We explored some other areas and had a great skate until the air warmed and the ice became unsafe.   We were reminded about our safety training and equipment after an incident - but it ended well.
Had a chat with a bunch of photographers who got there before us to catch the dawn.
Eventually we headed down and had another good skate in a nearby lake.
Dave set off for home and I checked out the Lower Manorburn before heading out for an evening skate at Clice Water.  Fabulous hard black ice and a great way to finish the day in the moonlight.

Poolburn: Skateble ice in the main bay and some other areas.  Skate with the frost and have a safety plan.  Track muddy when it thaws.
Manorburn:  Skateable ice in Ruchcutters

A big frost in Alexandra this morning got me out of bed and up to Poolburn.  Good to find some skateable ice in places mainly due to the old wind blown ice and and some snow ice which had strengthen with new ice around it.  Snow ice was a bit bumpy in places but had some smooth runs on new black ice around the edges.  Rest of the dam had around 15-20mm of new black ice which was too thin to skate on.  Great to be out on natural ice in my favourite place.


Poolburn:  Some skateable ice if you look for it but take care.  15-20mm over the rest of the dam with some water showing.  Track ok when frozen but muddy and rutted when thawed.

Idaburn: 10-15mm over some of the main area - the rest water