Another great skate today on Coalpit Dam.   Still need 4WD to access but worth the effort.   The white ice made it feel like a massive skating rink. Was warming up as we left - we hope it holds over the week with north westerlies forecast.

Today Dave P and I headed off to hunt for ice.  After the big snow of a week ago we were not sure what we would find as the temperatures had not been that low.  Still a bit of snow around on the way but lots when we hit the Naseby area.  This had created snow ice and we were treated to some great skating on hard smooth ice.
Coal-pit Dam was the standout.  First time either of us had seen in completely locked in and we were treated to good skating - we returned later in the day for another burst.

Coal-pit - hard smooth snow ice 70mm plus.  Need 4WD on the track because of snow.
Pond-on-George - smooth snow ice - good skate except for the water in/out spot.
Idaburn Dam - some good snow ice on main pond. Lots of water running in the area. Good skating on selected parts - be careful
Poolburn - thin plate ice on most of lake.  Limited skating if you look for it.  Track a bit muddy.

Also had a rare skate on Lower Coalpit

Visited the Lower Manorburn Dam this morning.  A skim of ice across the main basin and 12 to 15 mm in Rush Cutters corner. Wet and foggy but great to see some ice at least!  Hoping for frost!! 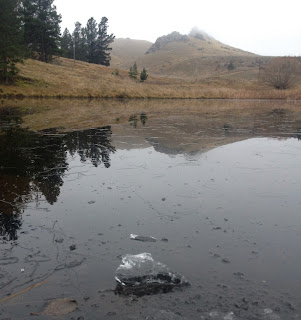 Warm around Otago so far this season.  We had a big snow dump a week ago and were hoping for colder days and a bit of ice hunting over the weekend.  Unfortunately everything warmed up again so we stayed home.

Cooler today and waiting for the frost!!
Posted by Dave at 9:42 PM No comments: