Lucky enough to get a bit of a skate today.  While in Queenstown today I spotted a possible skate and after a bit of a walk down an icy track from the ski field I had a skate on snow ice.  The ice was hard, a bit bumpy but good to skate on.  Great to get the skates on again!   Well worth the slippery walk although I not sure how 'ok' it was to skate there.
Visited the Lower Manorburn on the way home and was surprised to see a bit of ice in Ruchcutters.  Melted around the edge and did not look as though it would be there long.  No sign of ice anywhere else on the trip.

Up to Poolburn at day break this morning and was treated to
a spectacular sunrise.  Great to be out on black ice enjoying the atmosphere.  New black at the edge of the older ice and thick enough to skate.  Had a great skate down to the far bay - black ice all the way. Wow.  The older ice felt quite slow once I was back on it.  Maybe the last good ice before the weather turns.
Old the way home I dropped into Idaburn for a few turns around the main bay.  Good ice but melting in the warm wind.  Then on to Coalpit and what a surprise.  Clear ice across the whole dam.  Great skating (avoiding all the  debris near the pier!) and at times so clear it seemed like I was skating on a aquarium.  Fab.
Big winds and rain expected over the next few days - might loose all the ice. 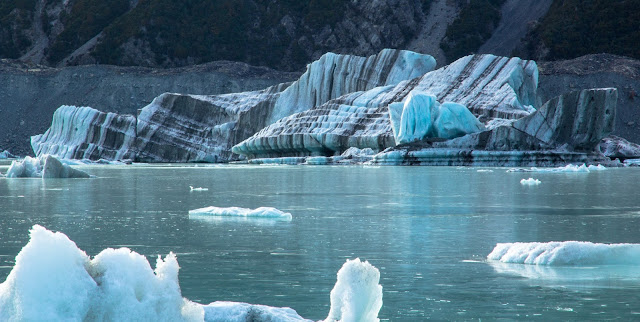 Up very early today and headed to Mt Cook to see if there was chance of a skate on Tasman Glacier Lake (after some good frosts).  The lure of the bergs was strong.  Reached the lake on day break to a awesome site - the ice bergs looked fabulous.  Unfortunately there was to be no berg skating this time as the ice was strong and hard but too thin to safely skate.  I did find place to skate but was unable to reach the big chunks of ice.  The ice was an amazing colour and hard and fast.  Care need to be taken as the colour of the ice hid open water well.
After a good skate I left Tasman and explored the nearby 'Blue Lakes' (they looked green!)  Skated on the bottom lake and the top one.  The top lake had the best ice I have skated on - fresh hard and (green) clear.  Middle lakes were dry.   Just fab.
Next was a walk to Mueller Glacier and was pleased to be able to skate in behind the island on Mueller Lake.  What a fabulous backdrop to skate under.  Great ice - smooth and hard - so smooth it felt wet but was dry.  Hard to leave.
Headed back to finish off with a skate on the Lower Manorburn - again very good ice especially in the upper basin. The drive down to Omarama was spectacular through the hoar frost.
Big day but most satisfying!

Ice report:  Lower Manorburn has good ice in the main and upper basin.  Skate with the frost.
Mt Cook:  Mueller has some skate able ice behind the island but would need a good check to see if it is still ok.  Blue Lakes have ice but only the top one is free from (thrown) stones. Top lake has fabulous ice.

Headed up to Poolburn early today with Dave P.  More ice overnight and much more stable.  Much of the main bay was skate able and we had a fabulous skate all around Claw Bay.  Good hard ice until it warmed up.  Was interesting to see the effects of the wind and snow in places - piles of wind blown ice and unusual freezing pattens caused by the light snow cover.
I left Dave up there to camp overnight  and headed off to check out a new spot and was treated to amazing black ice.   Could not get off as it was so smooth and hard.  You know you have had a great day skating when you have to get back to the car by head light. 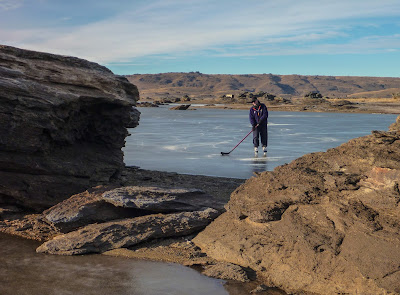 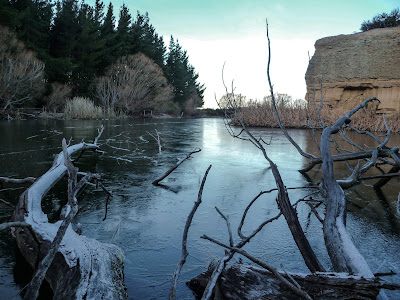 After a few big frosts a check at Poolburn was a must.  Surprised to find such variable ice and a lot of water.   There had been snow up there and some of the snow had reformed into skate able ice but care had to be taken as thickness varied.  Ice was a very dull colour - most unusual.
Found good ice a few bays over and had the best skate of the season.
A light breeze came up so was able to get out the kite for a bit of a kite-skate.  About 6hrs on the ice all up.  Great fun.  Also had a skate on a tarn on the side of the track.
Headed down to finish with a skate in RushCutters and then off to meet Dave to plan the next skate. 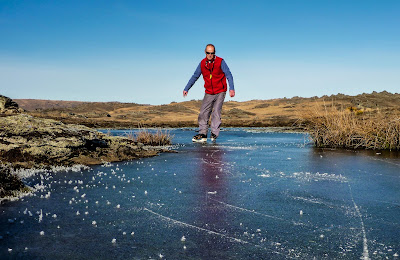 Ice Report:  Idaburn - up to 20mm.  To thin to skate
Poolburn: Has some skate-able ice if you look for it but variable with a lot of water showing. Risky.  Track good.  Lower Manorburn:  Skate able in Rush Cutters corner - maybe a bit further out if you skate with the frost.  Take care and check to ice first!!

The plan was to be in the McKenzie Country today but after a report from Allan and Dave I decided to postpone the trip until ice conditions improve (if ever this year....)
Instead I went for a quick tour around Central to check our local conditions.  Visited Coalpit, Idaburn then Poolburn.  Both Coalpit and Idaburn had some ice that was softening in the warmer temps.  Unusually the better ice was on the exposed side of Coalpit with water in the shade.  Both places need a few more frosts.
Poolburn was a bit of a surprise.  There was evidence of a hard frost although no ground frost at all when I got there. There was ice in some areas and plenty of open water.
After tentatively testing the ice I was able to have a skate in two of the bays.  Ice was borderline but held up despite cracking continuously under the blades. Did not venture too far but had a great couple of hours skating on smooth ice.
Dropped by the Lower Manorburn and Lawrence on the way home. I would have guessed there would be some ice on the Manorburn but there was only a skim of ice in part of Rushcutters.   Lawrence had about 10mm and very warm.

Every year I plan on skating somewhere new and thought I would miss out this year but.... spotted a pond I have not skated on before near Poolburn and  got my 'new spot'  skate for this year!!!

A worth while trip in the end and pleased to be on natural ice again but think this may be it for this year as the warm weather continues this week. 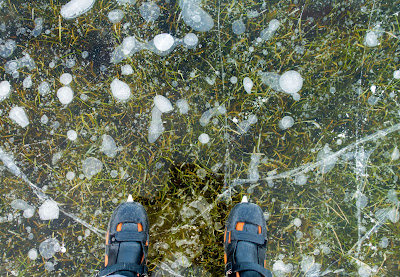 Ice Report:  Very little ice around Central.   Need a few frosts before anything becomes skate able.
Coalpit:  15mm on the sunny side.    Idaburn: 20mm in the main bay.  Water elsewhere.   Warm!
Poolburn: 20-30mm in some areas.  Some open water.
Lower Manorburn:  Just a skim in half of Rushcutters.