Headed off early this morning and met Dave P at Oterehua.  We were both surprised to see quite a bit of new snow on the way.

First stop after that was Idaburn.  The whole dam was locked in with ice but snow had effected the surface.  We had a bumpy skate up to the dam then came back and had fun on the smooth ice around the edge of the main skating area. 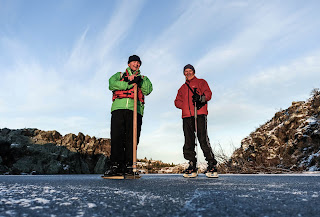 From there we drove - well I should say pushed through the snow - up to Poolburn.  Great to see the whole lake covered in thick ice but snow had made the surface quite rough.  Luckily the surface was hard so we skated around to the dam just enjoying the feel of the place.  Dave then completed a circuit around the main island while I walked over and met him on the other side.  Despite the rough surface is was great to be out on our favourite skating place.  We had an interesting ride out barging through the snow.
At the bottom we split up and while Dave headed to McKenzie country I went exploring and skated somewhere I have never skated before  Great ice - black ice with a bit if snow that had smoothed over.  Great to finish the day cutting some curves! 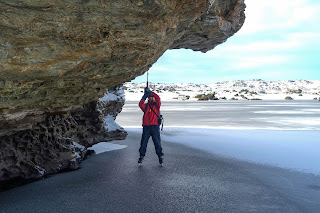 Ice Report:
Coalpit - locked in with snow ice. Bumpy surface - a thaw will smooth off.  Snow on track - may need chains for 2WD

Idaburn - plenty of ice up to the dam.  Snow effected and bumpy but smooth around the edge.

Poolburn - Good thickness over most of the lake but rough surface.  A thaw or wind will change the ice quickly.  A lot of snow on the track.  Just ok with a 4WD.  Will need chains if any more snow.

Great way to start the day...

Got up early and went out to the Manorburn for an early morning skate.  Great ice - mostly black ice with some slightly bumpy areas.  I skated down the gorge to the entrance of the lower basin.  the ice was thinner here so turned and headed back across the middle basin and through the neck to the upper basin.  A good skate until I reached rough ice.  So nice to be on the ice at daybreak and watch the morning come alive while cruising the ice
Great way to start the day before heading back to work.
Met Llew on the way out from the dam - another keen natural ice skater!

Not sure what will happen to the ice over the next few days and warmer temps and wind are forecast... 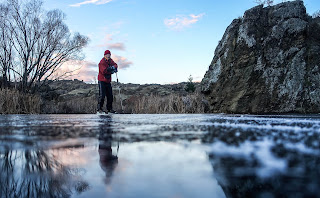 Ice Report
Lower Manorburn:  Very good ice all over the middle basin.  Lower basin ok near the pier.   Gorge is thin at the dam end (beware - avoid..).  Upper basin has good ice up until the rough ice.   Note:  Middle basin should last a bit but warmer temps and rain over the next few days will change things fast... so check carefully..
Posted by Dave at 6:25 PM No comments:

The best ice there is...

Heading up to  Central Otago today I checked out a few of the local spots.  Everywhere looked fabulous in the sun and snow with plenty of ice around.
Every year I like to skate somewhere different and this year I choose a pond on the road to Middlemarch.   Had a good wee skate with a few rocks to skate around - but really if I had time I could have skated in a dozen places.
Next stop was Coalpit Dam.  The whole dam was frozen with hard but bumpy snow ice and I was able to skate anywhere - something you can not do every year.  Some the the ice was frost effected.

Then....... Idaburn Dam and what fabulous ice!  The dam had frozen hard and fast and was covered in about 80mm of hard smooth black ice - the best there is.  In the shallow areas you could see the bottom and in one place the cracked mud from the dry over summer.  I skated down the gorge to the dam and back and across the inlet then just cut some grooves.....  An absolute pleasure to skate and pretty hard to drag myself away.... 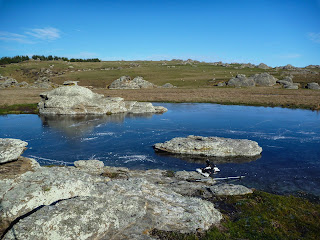 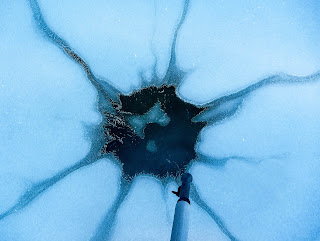 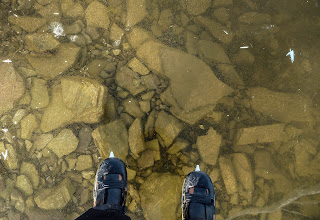 Ice Report
Coalpit Dam:  whole area locked in with around 60mm of a mixture of snow and black ice.  Hard but bumpy and will improve with a slight thaw.  Snow on track in but passable.

Idaburn:  Whole dam frozen in with up to 80mm of black ice.  Snow affected beside the dam and at the hut back the the rest is smooth and fast.

Managed to fit in an early morning skate after 2 days of frost.  Only had time to go local so headed to Mahinerangi.  Found ice in a couple ponds near the lake - just borderline for a skate but found thicker black ice in the enclosure.  The enclosure is a dangerous place to skate normally (need very careful testing) but was fine in a couple of small bays and I loved the new back ice.
Great way to start the day.

Ice report:  I don't really recommend Mahinarangi as the ice comes and goes quickly and is effected fast by the weather and day temperatures.  A chancy place to skate.

Manorburn:  I heard last night (Tuesday)  that Rushcutters is skate-able.  Should be even better after this mornings frost.

Dave P and I decided (late last night) to go out and explore today not really expecting to see any ice suitable for skating but to gather a little information about what is out there.
Coal Pit Dam was out first point of call. Surrounded by snow the dam had about 10mm of ice covered in another 10-15mm of snow ice.  The ice was very weak and would not hold any weight though I did try the ice-skoot on the edge.
We headed then to Idaburn - the dam was mostly water with a skim of ice near the edge.
We debated whether to bother going to Poolburn but after seeing not too much snow on the hills decide to head up for a look.   Getting there was interesting as parts of the track had snow drifts and we had to go off track to get around.
The whole dam was covered with 'not quite enough' ice - snow effected ice that had become weak with warming temperatures.  We explored a bit and found stronger ice in one bay and were able to have an unexpected skate around the edge of the bay.  Bumpy and rough but hard.
A light wind came up and I was also able to have a snow kite around the end of the same bay (yeah!).
A fun day all round.

Coalpit Dam - Thin ice cover by thicker snow ice - still a way off skating.  Some snow on the track in.
Ida Burn - Mostly water - skim of ice around the hut edge.
Poolburn - Covered in 20-40mm of snow affected ice - lots of air in the ice making it weak.  Some edge bits skate-able if you are early and take care.  Track needs 4wd (and maybe chains) due to snow drifts.

Waiting for the frost....

It has been a wild week for weather with plenty of wind and temperatures above freezing all around Otago.  More stormy weather this weekend and no sign of ice.
Back to waiting for the frost!

Well it has been a long wait after the early end to last season.   I missed the frosts last week and have been waiting for conditions to settle again after a week of wild weather.   Made a snap decision to head to the Lower Manorburn this morning after the temperature did a massive plunge over night to -6.
Great to find skate able ice - hard and smooth black (locked in) ice over Rush Cutters corner. Probably the best early season skate I have ever had.

Looked like the ice in Rush Cutters has been there for a day or two but the rest of the dam was covered with about 10mm of new ice.  Fabulous skate... 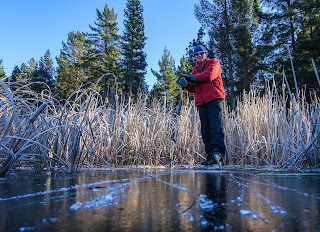 Ice Report:  Skateable ice in Rush Cutters corner 60mm going out to 30mm (approx).  Cracking as the day warmed up.  10mm over rest of main basin and lower basin.  Won't last unless we get more frost...