Well how about this. On Monday (16th Aug) while going through Alex I drove out to the Lower 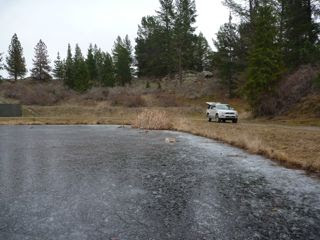 Monorburn just to check that the ice melted and was surprised to see a lump still in Rush Cutters Corner. The ice had formed so thickly here during the cold spell that it took some melting! It was still around 100mm thick but in weak condition. I managed to get a bit of a skate due to the sheer thickness. It was quite weak and noisy - with a hard but rough surface. When I left it had cracked into smaller pieces that were rubbing together. Not pretty ..... but hey a late season skate! 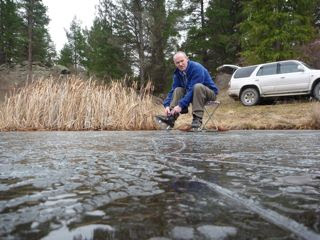 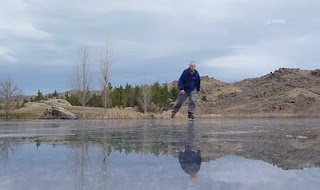 On the way home this afternoon I checked the Manorburn and had a good skate in Rushcutters Corner. Amazingly the ice was hard tho a little wet and had held up well despite warm temperatures. The ice thinned out to around 50mm before it became creaky but was still locked in at the edge on the shady side. Patches of ice else where in the main basin but none of it skate-able. As I left there was a brisk warm wind starting a thaw. Good to have one last glide around to finish the natural ice season.
Posted by Dave at 9:25 PM No comments:

Called past the Lower Manorburn tonight and there was still ice in the middle basin. Quite thick and skate-able in Rushcutters corner with the edges still locked in. Had a good skate on hard smooth ice. Did not check other areas as I arrived on dusk and skated into the darkness. Lucky I threw the skates in - but no drill!
Posted by Dave at 9:42 PM No comments: 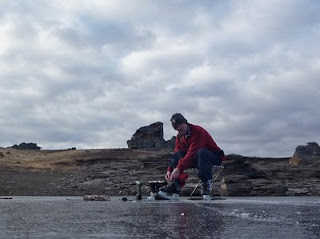 One last skate for this season - and you know it is the end if you have to use a plank to get on the ice after a thaw. Had a look at Idaburn and Poolburn Dams and skated in both places. Idaburn had skate-able ice over half of the main area. A plank was needed to get on as the edges had melted. Good skate on hard ice but care was need to stay in the safe area. Poolburn had several large areas of ice but was melted at the edges. I had to hunt for a place to get on with a plank and had a good skate in one area but again had to watch that I kept on safe ice. As I left the ice was creaking and beginning to melt fast. Good to get one last skate in. 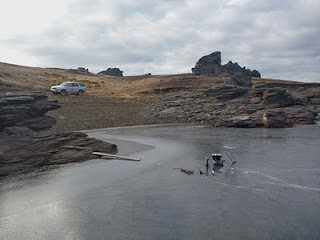 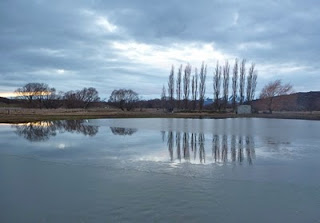 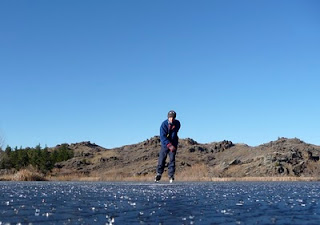 Dropped in on the Lower Manorburn today to see how it had held up after the rain and warm weather. Still thick ice in Rushcutters bay - thinning out to 50mm in the middle of the main basin with water at either end. Ice full of air bubbles and weakening in the sun. Water in the top and bottom basins.
Had a good - but bumpy skate in Rushcutters and out towards the middle - too unsafe anywhere else. Might be the last skate this year.......

Two weeks ago my brother Elton came over from Auz and I took him skating. We were lucky enough get to the Lower Manorburn on one of those rare days when you can skate from the inlet in the trees down to the outlet over the dam. Great skate!! Total distance direct is about 2.3 kms. Bro was absolutely stoked with the experience.
(the video is a wee bit too long ...... but hey what a skate!!)


Visited Poolburn yesterday with Dave and Ryan hoping to get a last good skate here and we were surprised to find as much ice as we did. No plank needed to get on. Thick ice over most of the dam. Skated around the main island but had to walk once around open water. Pressure cracks have opened in the ice and left water in various places. Edges were soft or open water. As we left a North West wind was ripping up the ice fast. Managed a short ice-sail with the kitewing - first one this season!! 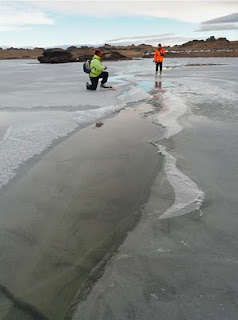 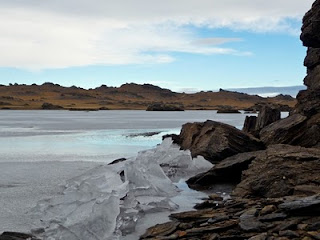 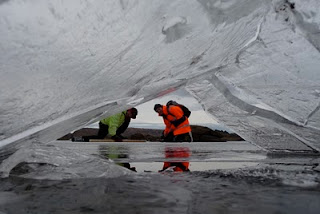 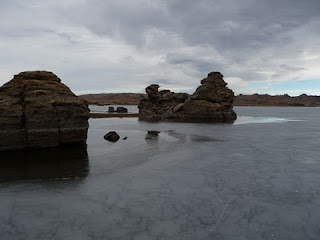